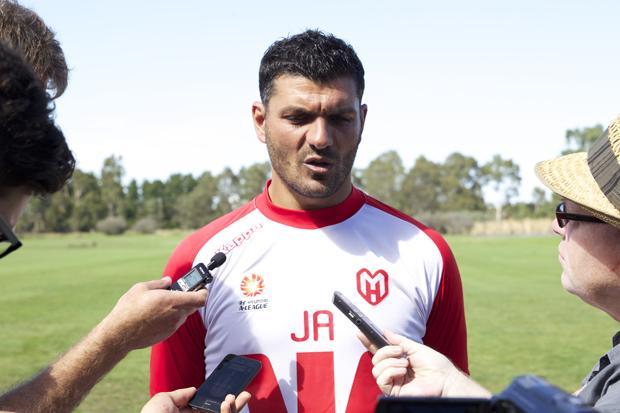 Melbourne Heart FC Head Coach John Aloisi has welcomed the prospect of a near full-strength squad as his team shapes up for tomorrow’s crucial Hyundai A-League match against Adelaide United FC at AAMI Park.

Melbourne Heart FC Head Coach John Aloisi has welcomed the prospect of a near full-strength squad as his team shapes up for tomorrow’s crucial Hyundai A-League match against Adelaide United FC at AAMI Park.

With Heart-s top scorer Josip Tadic returning to full training this week after a four-week absence though injury, Aloisi will have the luxury of selecting a squad brimming with energy and confidence ahead of another crunch match at AAMI Park, which has been converted into a Red and White fortress in 2013.

Aloisi will name his starting line-up on match-day for the Labour Day clash against the Reds, but has signalled that both Tadic and teenage centre-back David Vrankovic will be considered, increasing the Red and White-s attacking and defensive options.

Aloisi is already spoiled for choice in the midfield, with captain Fred, vice-captain Matt Thompson – who is set to make his 200th A-League appearance – vying with starting positions alongside recent signing Marcel Meeuwis, Nick Kalmar, Jason Hoffman and Jonatan Germano.

Vrankovic has impressed when selected and could jostle with Simon Colosimo and Patrick Gerhardt for a spot in central defence, while Tadic could add another attacking outlet if selected.

While Aloisi has recognised tomorrow-s match as another ‘must-win- scenario after a number of teams below the Red and White won over the weekend, he is confident he has the squad capable of securing a sixth consecutive win on home soil.

“The beauty of this week is I’ve had virtually a full squad to choose from – except Mate [Dugandzic] of course who has been out for the season and Sam Mitchinson who is just coming back – but the rest of the players are fit and ready to go,” Aloisi said.

“We haven-t had that too often this year and it makes my job a lot easier because there is competition for places and players know that they need to perform.

“It makes training more intense and players know that they need to perform or else they know they could not only be out of the starting eleven but out of the squad.”

While Heart faces a testing week with Adelaide tomorrow and league leaders Western Sydney Wanderers on Saturday 16 March, Aloisi has drawn on his side-s positive home form in the run in to the finals as pressure mounts to secure a top-six berth.

“We-ve had that pressure since December after the Wellington game coming back in the New Year and I remember [the press] saying that ‘the next two games are must-win against Brisbane and Newcastle [in the first week of January]’,” Aloisi said.

Heart managed to step up to that external pressure on home soil and secure six points from the two outings with a 2-1 win on New Year-s Day and a 3-2 win over Roar just five days later.

“Since then our home games have been must-win games so this is no different; the boys have been performing really well at home and they know that it is another game that we have to win, or at least do everything possible to win the game,” Aloisi said.

“There is a lot of football to still be played and we-re confident that we can get the result that we need on Monday night.

“I think these two home games will go a long way to see whether we can make finals and then we will worry about the Brisbane game when it comes, but we-re confident we can get the results we need at home.”