Our road to the Westfield FFA Cup Final 2016

John van’t Schip’s side began the campaign with a hard-fought away win against National Premier Leagues side Floreat Athena, before navigating a way past another Member Federation club in Brisbane Strikers.

Michael Jakobsen’s spectacular bicycle kicked headlined a 4-1 dismantling of the Western Sydney Wanderers in the Quarter Final at AAMI Park, before City once again claimed local bragging rights in a feisty Melbourne Derby to book a spot in the tournament showpiece.

As we prepare to battle Sydney FC for the season’s first piece of silverware on Wednesday night, we take an in-depth look at our run to the Final.

Despite entering its Round of 32 tie against NPL WA side Floreat Athena as heavy favourites, City certainly didn’t have it all their own way at Dorrien Gardens.

It looked as if a routine win was on the cards when Nick Fitzgerald opened the scoring with a powerful low drive after 32 minutes, but a nervy finish ensued when Kris Gate equalised for the hosts on the hour mark.

A spectacular long range drive from Anthony Caceres put the kibosh on any idea of an early Cup upset and sent City into the Round of 16. 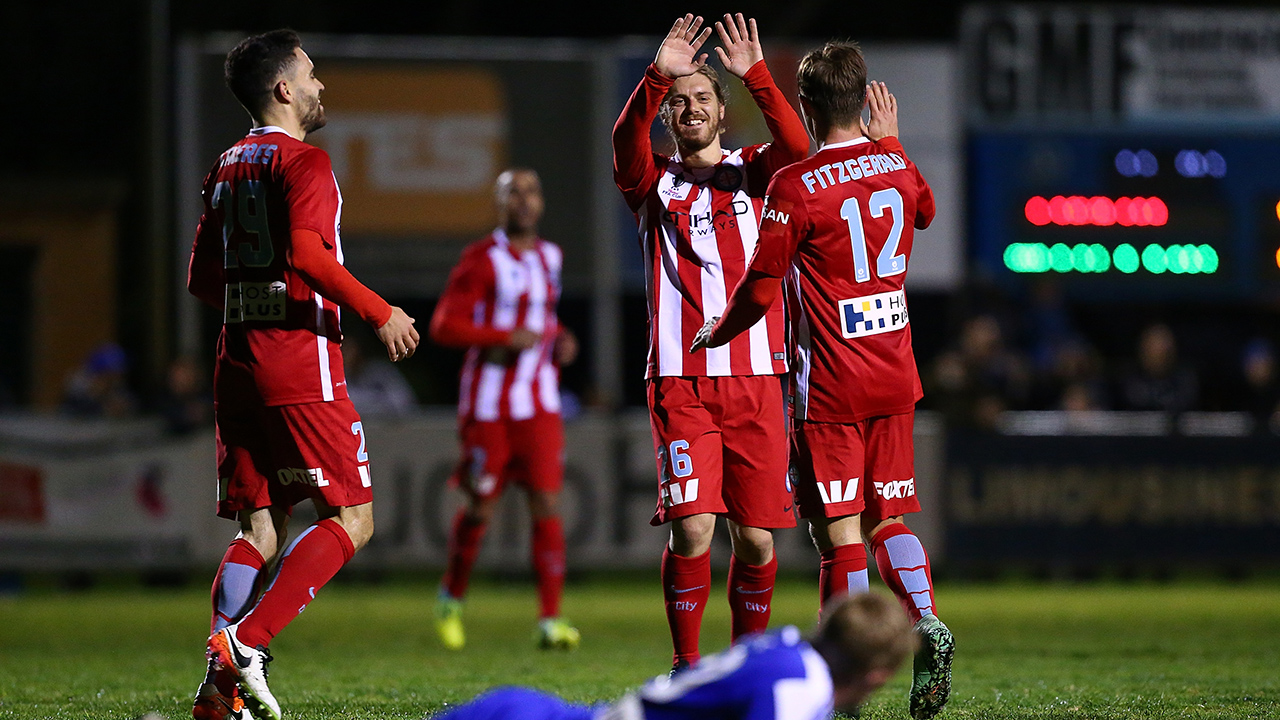 The first domestic appearance of Tim Cahill in almost 20 years attracted a record attendance of 3,571 at Perry Park as City were pushed all the way by NPL Queensland outfit Brisbane Strikers.

Bruno Fornaroli’s double from the penalty spot secured the come from behind win for John van’t Schip’s side after the locals took a shock lead courtesy of Greig Henslee’s deft finish.

The night also marked the debuts of Josh Rose, Neil Kilkenny and Brad Clarke, but it was Cahill’s appearance which stole the show as the Socceroos striker played his first 30 minutes for the Club.

It didn’t take long for Michael Jakobsen to endear himself to the City faithful at AAMI Park.

In fact, it only took a mere two minutes. Pulling on the City colours for his first competitive appearance for the Club against Western Sydney Wanderers, the Danish defender announced his arrival in style with a spectacular bicycle kick that set the tone for a rampant 4-1 Quarter Final win.

Goals to Bruno Fornaroli, Tim Cahill and Argentine Fernando Brandan completed an emphatic performance, as John van’t Schip’s side coasted through to the Semi Finals for the second consecutive season.

The 21st edition of the Melbourne Derby produced a contest which displayed the Westfield FFA Cup at its very finest.

It was an encapsulating battle from beginning to finish, with the second largest FFA Cup crowd of 15,791 flocking through the gates to witness another Melbourne Derby encounter which produced plenty of fireworks.

Luke Brattan got the ball rolling with a long range strike after just nine minutes, while Fernando Brandan put the icing on the cake in the second-half to send City to its first ever tournament final.

Overall, it was a deserved reward for John van’t Schip’s side. The attacking incision which was so dearly missed in a league defeat against Perth Glory returned when it mattered most, while the defence stood firm amongst a wave of Victory pressure in the second-half to record an impressive clean sheet.

Next stop: The Final!

After an exciting Cup run, there is now one final step to make. We want the City Family to rally together at AAMI Park and get behind our boys as we look to win our first Westfield FFA Cup trophy. Click here to witness history and secure your tickets to the Final!