A magnificent double from captain Bruno Fornaroli fired Melbourne City to a 2-1 win over Newcastle Jets in the opening match of Remembrance Round at AAMI Park on Thursday night.

In the previous five meetings between City and Newcastle, the back of the net rippled a staggering 23 times.

It was a storyline which set the tone for a pulsating opening to the match as both sides had golden opportunities to open the scoring inside the opening five minutes.

Ivan Franjic was the prime exponent of City’s high pressing game on his return to first team action, manufacturing the first chance of the game with a piercing cross into the path of Tim Cahill, whose header stung the palms of Jets goalkeeper Jack Duncan.

John van’t Schip’s side started brightly against a Newcastle outfit content on sitting back and absorbing pressure, but dodged an enormous bullet only two minutes later when Morten Nordstrand scooped Andrew Hoole’s cross over the bar from point-blank range.

It served as a timely wake-up call for City as Fornaroli made the Jets pay in the 14th minute with a bullet header from Fernando’s pin-point cross to open the scoring.

The Uruguayan’s second goal was a moment of pure class. Bruce Kamau turned his marker with sheer pace before whipping in a driven cross into the path of Fornaroli, who smacked a sumptuous first time volley past Duncan to double the lead.

Fornaroli nearly completed his treble only seconds later but was denied by a superb last ditch tackle, before Dean Bouzanis stood tall to deny Andrew Nabbout at the other end.

Nabbout was a constant threat in attack for the Jets and his persistence paid off in the 36th minute, lashing home a drive which deflected off Michael Jakobsen and past Bouzanis to make it 2-1.

City started the second half in the ascendancy in search of the killer third goal. Fornaroli was denied his hat-trick by the head of Nigel Boogaard, before Franjic did well to block a dangerous effort from Hoole up the other end.

The Jets threw numbers forward in search of a late equaliser and nearly pinched a point as Jason Hoffman headed wide in the dying seconds.

It would have been a harsh result had the ball sailed in, but John van’t Schip’s side held firm to secure an important three points.

It could have been a vastly different evening for City had Nordstrand not missed a golden chance inside the opening minutes of the game.

Having seen Cahill denied by Duncan only moments before, the Jets quickly countered though the pace of Hoole, who laid the ball on a silver platter for the Danish striker to sweep home into an empty net.

Score he did not, however, and the Jets were made to pay for their wastefulness as Fornaroli stole the show with a well taken brace.

Man of the Match

Bruno Fornaroli was at his scintillating best once again. The Uruguayan produced two cool-as-you-like finishes to take his league tally to six goals from as many matches.

Fornaroli has now scored a staggering 30 goals in 35 A-League appearances, becoming the fastest player in league history to reach that milestone. Could it be back-to-back Golden Boot awards for the captain? 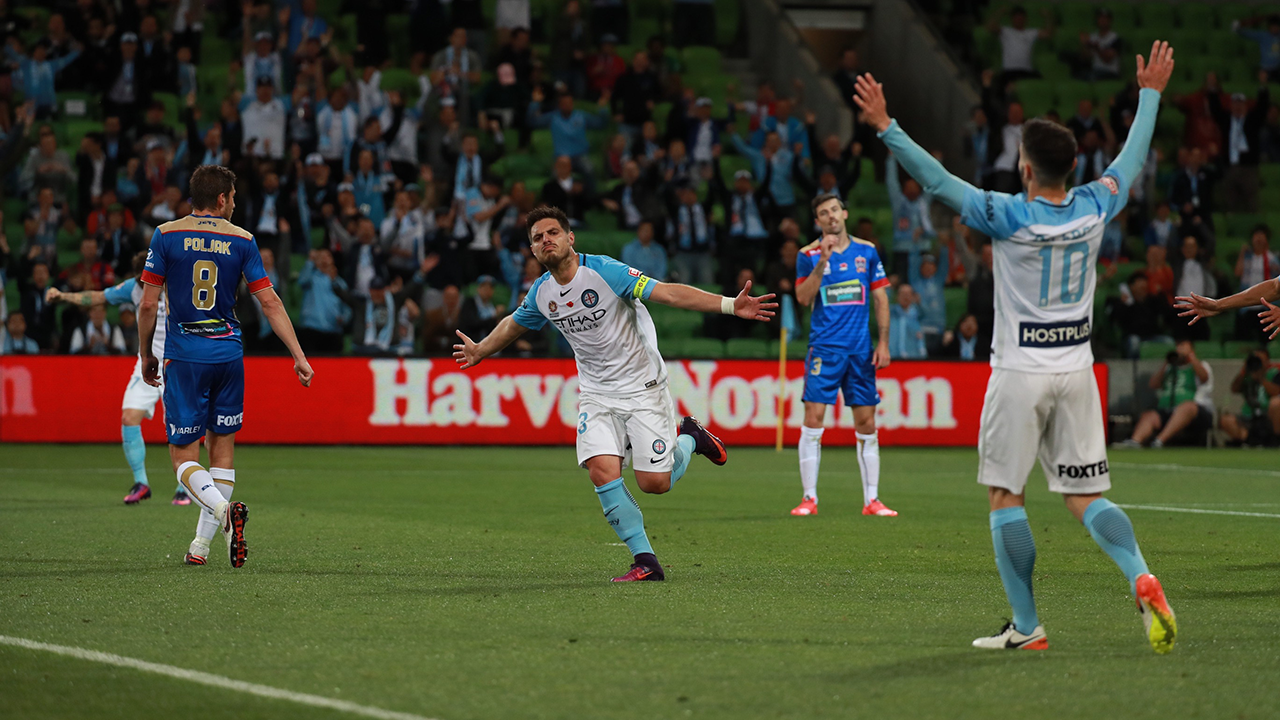 It was a sense of deja vu for the Newcastle defence, as Fornaroli took his tally against the Jets to five goals from four matches with a well-taken brace.

A tricky away trip looms next week for John van’t Schip’s side, who will travel Spotless Stadium to face Western Sydney Wanderers next Friday, before returning home to AAMI Park an exciting double header on November 27.

City’s record-breaking Women’s team will battle it out for local bragging rights in the W-League Melbourne Derby, prior to the A-League fixture against Wellington Phoenix.