Melbourne City FC made the perfect start to 2017, as Ivan Franjic’s spectacular volley secured a 1-0 win over Western Sydney Wanderers at AAMI Park on Friday night.

Franjic’s 19th minute stunner – his first goal for the Club – ensured Michael Valkanis’ tenure as interim Head Coach got off to the best possible start, with a win over the 10-man Wanderers enough to propel City to third on the A-League table and open up a nine point gap on the sixth placed visitors.

It was a performance of both control and determination as City were made to work by the Wanderers despite a clear dominance in possession, but created enough clear-cut chances to win the match by an even bigger margin.

The return of defender Michael Jakobsen added an extra layer of steel alongside young partner Ruon Tongyik, while the win will serve as a confidence booster after a difficult week which saw the departure of Head Coach John van’t Schip. 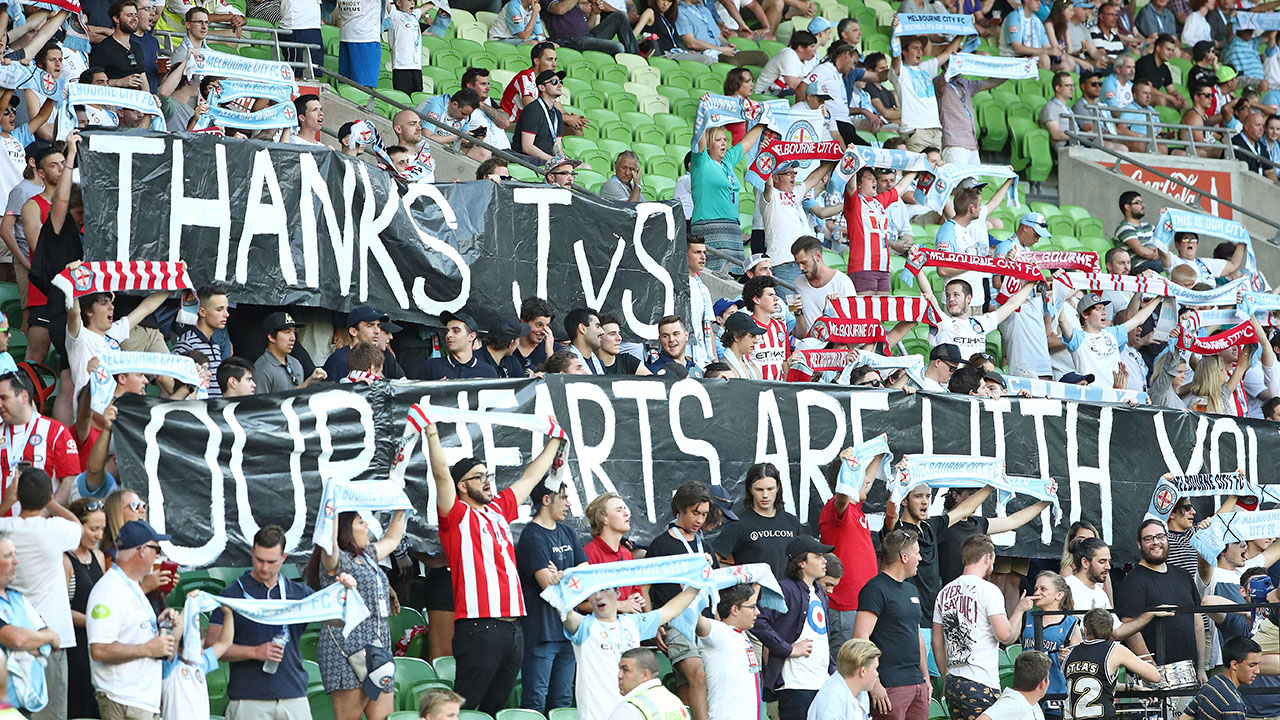 City began the match with great intent, controlling possession and moving the ball at pace while looking to utilize the width of Bruce Kamau, Ivan Franjic and Josh Rose at every opportunity.

Kamau was a livewire in the opening stages and was a coat of paint away from a stunning opener inside the opening two minutes, as his rasping cross curled inches wide of Vedran Janjetovic’s top corner.

Tim Cahill was denied the opening goal only minutes later as his header was swept off the line by Wanderers midfielder Jaushua Sotirio, until Franjic opened the scoring in quite stunning fashion as City were rewarded for their dominance.

A teasing corner from Nicolas Colazo was cleared away confidently by Kearyn Bacchus, but only as far as Franjic, who didn’t break stride before unleashing a tracer bullet which curled away from the despairing Janjetovic and into the bottom corner.

City continued to press hard as Rose came close to becoming the second full-back to find the scoresheet, flashing a powerful effort agonisingly wide of the post after being played in by Fornaroli.

The Wanderers were firmly pegged back inside their own half but had a golden opportunity to hit back through Mitch Nichols, who was denied smartly by Dean Bouzanis in a one-on-one situation.

Fornaroli, who led the line with strength and guile, threatened at the other end almost immediately, twisting away from the Wanderers defence before hitting a shot which just flew over the crossbar.

The Wanderers were dealt a significant blow on the half-hour mark when Borda was dismissed for an elbow to the head of Fornaroli, as City entered the half-time interval a man and goal up.

City began the second half brightly as Kamau saw his rasping drive charged down by Jonathan Aspropotamitis after a neat back heel from Fornaroli, while Cahill headed a pin-point cross from Franjic just wide of the goal.

The visitors began to find some attacking momentum as Bruno Pinatares unleashed a curling shot which Bouzanis, who didn’t have a lot to do, brilliantly parried out of the corner.

Luke Brattan’s neat square pass gave Fornaroli a golden chance to double City’s lead, only for Clisby to make a crucial last-ditch block, while at the other end, substitute Lachlan Scott was only a whisker a way with a snapshot that sailed wide of the post.

Fornaroli and Kamau both had late chances to ice the match but were twice denied by smart Janjetovic saves, as City started the new year with an important three points.

Player of the Match

So often this season has Neil Kilkenny been the metronome by which City tick.

The midfielder was once again outstanding in the centre of the park, with his passing efficiency and sheer appetite to receive possession influential in City’s dominance on the ball.

Kilkenny’s array of passing was instrumental in stretching the Wanderers defence, teeing up full-backs Ivan Franjic and Josh Rose on the flanks with his vast array of long passing.

Both full backs contributed signficantly in both attack and defence. Franjic was immense in the opening half and got the ball rolling with his brilliant volley, while Rose rolled back the years at left-back, venturing forward with adventure and purpose.

But it was another polished display from midfield general Kilkenny, who has carried on his excellent form into the new year.

It’s a return to Thursday Night Football for City next week, who travel to Coopers Stadium next to face Adelaide United on January 12.